Recent screenplay work includes writing on ‘Children of Men’ (2006), ‘Journey to the Center of the Earth 3D’ (2008), and Guillermo Del Toro’s highly successful animated feature ‘’The Book Of Life’ (2014).
In 2006, Chart was chosen by Fade In magazine as one of the ‘100 people you should know in Hollywood’, and in 2009, the restoration of Abel Gance’s epic masterpiece “La Roue” (1923) was dedicated to Chart by esteemed composer Robert Israel.

Chart’s most recent screenplay is an adaptation of Walter Mosley’s controversial novel, ‘Killing Johnny Fry’ (2019). Mosley (Devil in a Blue Dress) and Denise Grayson (The Social Network) will produce. 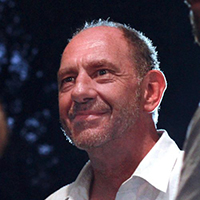